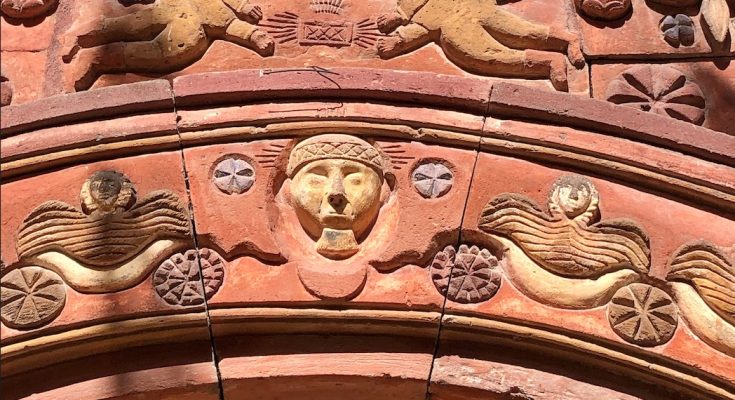 In this rich Frontier of the Tierra Adentro (Mexico’s interior central highlands), as we’ve seen, our natural and cultural heritage has been simmering between encounters and disagreements, aggressive and cordial, in various spaces and with different ethnic groups from this continent, including Mexico, and the diverse Mesoamerican ethnic groups, from Europe and the whole world.

Without a doubt, San Miguel de Allende has been at the epicenter of this complex and wonderful process for at least the last five centuries. Syncretism, the mosaic of diverse perceptions of reality, is part of the fascination or magic of this place and its community. Using the tools of reason and observation, cosmovision and worldview, and religion, the community has consolidated its knowledge through diverse languages: spoken, written, and unwritten. The unique personality has been formed by the temperament and character of our society in the Frontera Tierra Adentro (Inland Frontier). It has developed through languages ​​that communicate with a sense of belonging the identity of our territory’s myths, rituals, and characters, with its diverse ecosystems and multi-ethnic community, using codes, symbols, iconography, imagery, and even physiography.

About 2,500 years ago, the process began in our region with the language of the Chupícuaro culture and their Mesoamerican contemporaries. Language was their most complex and precise weapon to understand and project their reality. They used it to mold their mind and perceptions, which then transferred into their concepts, cosmoview, and religion and projected into their myths, rituals, and characters. And communication was not only among other humans but also with the stones, forests, wetlands, canyons, water, plants, animals, and, of course, with the souls of the perceived environment, including the caves, springs, the earth, and, of course, the infinite firmament. In short, they connected with the underworld and the vault of heaven.

With the incursion of the first Europeans into these lands, the cultural diversity and perception of reality were enriched by dialectical tensions, between wars and oppression, between different indigenous groups. Living in this region were independent groups such as the Chichimecas Huaxábanas, Guamares, Pames, Jonases, Copuces, while groups allied with the Spanish included the Otomi, Tlaxcaltecas, Mazahuas, Zapotecs, and Totonacs. Shortly after the arrival of the Europeans, from about the 1540s to 1590s, the Purépecha presence in the region of Michoacán also left its mark on the vast and complex centuries-old cultural heritage, coupled with the cultural traditions introduced by the dominant Spaniards in war, politics, economy, and ideology, which were mainly Hispanic Catholic cultural traditions influenced by the Judeo-Christian, Moorish, and Greco-Latin traditions plus the Castilian language and the once sacred Latin.

Cosmic, wild, terrestrial, or underworld entities of the divine, the majestic, or the stately already had their attributes, the majority projected from the human and became recipients of the words, signs, symbols, and meanings of this new community of indigenous, African, mestizo, mulattoes, criollos, and Europeans. They created the characters that are the product of the syncretism typical of our region, which are recreated and empowered with their unique characteristics with each new cycle (generally annually) of myth and ritual. Some are expressed in sculptures, ceramics, paintings, or everyday objects; some are portrayed with natural forms while others by abstract concepts. Some are of Mesoamerican origins, such as jaguars, dogs (xolotl), or eagles. Others are portrayed in multiple forms, such as the primitive lord Cicpactli who projected himself as a lizard, snake, or fish.

With the arrival of Christ in American lands, some symbols acquired at least two meanings. Examples are the Holy Crosses, like the atrium cross of the parish, or those found on pinnacles and hilltops. Some others with cultural connotations of double meaning are the dark-face Virgin of Guadalupe of Cáceres, the Christs with dark or brown skin and physiognomies, and faces closer to the Mesoamerican character.

Other characters were re-interpreted by the indigenous hands that modeled and molded them, as in the case of the archangels, angels, seraphims, and cherubims, or, of course, the Christs of Conquest. Many others settled in Catholic temples with multiple projections and interpretations, such as the Moon-Rabbit, the Marian projection of the morning star (with eight points), and the concept of the Mesoamerican quincunx. And many of them transcend from objects of worship and devotion to dynamic and lively actors in the rituals of popular and patron saint festivities.But the most outstanding thing is that all these characters have the latent ánima (soul) or spirit of the ancestors and the living and cyclically commemorate them. This is the exceptional wonder of the Frontera Tierra Adentro. 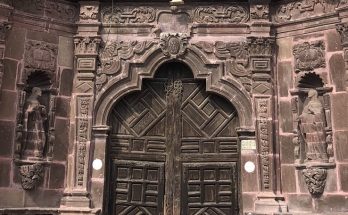 Myths, Rituals, and Their Characters: The Early Days of the Viceregency 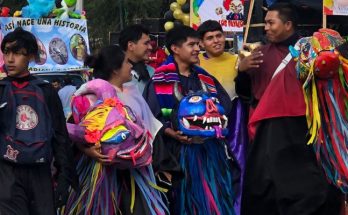 Myths, Rituals, and Their Characters 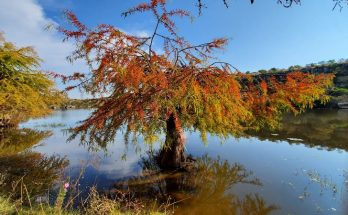 Springs and Water Flows: Wonder of Nature, Privilege of Humanity