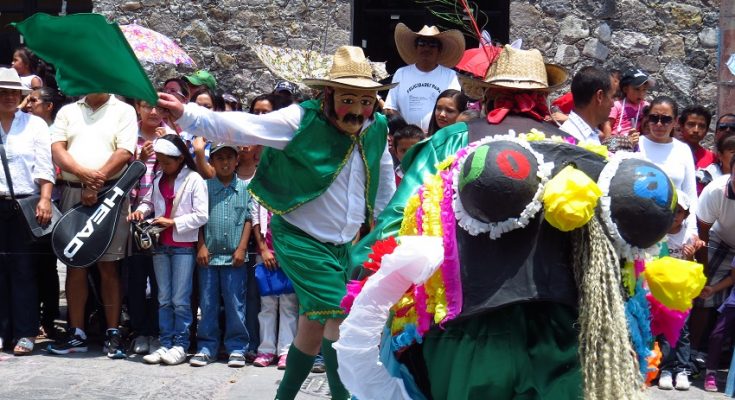 In the past, San Miguel had an abundance of water from various springs, particularly in the southeast parts of the city. Many orchards were planted throughout, including in the areas that are now parks. Pears, apples, plums, and other seasonal fruits were harvested by the hortelanos—gardeners or orchard keepers. Every year during harvest time, the orchard proprietors opened their doors to all the workers and their families to come and eat all that they wanted. There were also religious celebrations in the churches during which people dressed up as gardeners in overalls, boots, long-sleeved shirts, and hats. They all danced in honor of San Pascual Bailón.

Eventually, others became attracted to the dances and celebrations and started gathering en masse to watch. The gardeners realized that their dance space was being encroached upon and came up with an idea to disperse the public. They put on grotesque masks to scare the others away. They also began to carry animals that might keep people away—skunks, ferrets, pelicans, armadillos, and other strange creatures. And that is why people started calling them “los locos”—the crazies.

It is from these beginnings that the Los Locos parade began, and groups or squads formed to continue the religious festivities as a tribute to San Pascual Bailón. The saint’s festival day falls on the first Sunday following the June 13 feast of San Antonio Padua, who is worshipped in the parish of San Antonio, where his statue was once kept. It has now been moved to the church of San Juan de Dios.

A major part of the celebration was the torito (little bull) dance, which became a staple of the Los Locos parade. The first members who did the torito dance lived on Aldama Street and were made up of several families: the families of Doña Lola, Doña Carmen, and Doña Fulgencia, and they were all orchard keepers.

Don José Sanchez recalls that the Granados family (the Tishas) lived in the Guadiana neighborhood and were some of the original members. They took part in the rehearsals that were held at Doña Andrea’s house, next to the house of the Pérez family. There were approximately 50 hortelanos, and they rehearsed the torito dance, which consisted of four bullfighters and the bull. At that time, the entire Locos group was barely 20 in number.

The participants met very early in the morning for rehearsals. Don Inés or another musician came out and played the different melodies that make up the series of los hortelanos and el torito. The celebrations were held in churches or parks, and food was provided in one of the houses whose family had agreed to do so. Participants were offered bread, atole, and the typical chickpeas for lunch.

The religious ceremonies in which they participated were three: Corpus Thursday in the morning, in the Parroquia; Octave of Corpus, in the Oratory, in the afternoon. On the day of San Antonio de Padua, food was provided at the reception, and in the afternoon in the atrium of the church. The finale was the charlotada—a comic performance carried out under the mesquite that still stands in the atrium of San Antonio church. They placed beams and purlins to form a ring within which they put heifers and calves. Then the Locos made fun of all those present. On some occasions, the ring was broken, and the animals ran around, scaring everyone.

The way the squads were organized was as follows: a group of people, usually all from the same neighborhood, elected a manager or captain, and thus the group was formed. The Patlán family is well known, particularly Mr. Cruz Patlán. They were known as the camoteros—those who grow sweet potatoes, because that was the product they sold in the market.

According to “Gordo” (the fat one) Ledesma, the New Squad was formed in 1961, and he was a member for many years. He says that it was started by Joel Muñoz, “el Bigotón,” (the moustache), son of Luis Muñoz, who had his bar on Sollano Street. The other founders were Luis Gutiérrez, the “Indian,” who had a seed shop in the old market; the Briones family, from Santa Ana; the Guacharos, who were in front of the Library; Don Primitivo Luna, the «Chipotas;» Francisco Castañón, “Garbanzos,” the chickpea; Luis Bocanegra, the “Tintis;” Ángel Arriaga, the “Cácaro;” Jesus Perales, the “Chiruja;” Simón Espinoza, the “Mocho;” the Jaspeao; the Marquez Cat; Ceferino Licea, the “Calf;” Transit Salazar, the “Long;” Benito López, the “Handyman;” José Lopez, the “Cramps;” Andrés Salazar, the “Canillas;” Evodio García, the “Prieto;” Luis Zúñiga, the “Calatayud;” Leoncio Ceballos, “Loncho;” Carlos Aranda Muñoz, the “Dandy;” Juan Espinosa, the “Donkey;” Serapio Chavarría, the “Tontillo;” Antonio Espinoza, “el Mejoral;” and Emigdio Ledesma, “el Gordo.”

Shortly after, restructuring took place and Primitivo Luna, the Chipotas, was put in charge. In 2009, when he died, his wife Angelita took over until 2016, when she passed away. Currently, the person in charge is Patricio Espinosa and Graciela Luna, the niece of the previous directors, who has been participating for 20 years. She originally committed to dancing for five years and then continued for another five. She is still dancing simply for pleasure.

Currently, the New Squad participates with some 1,300 Locos. It is made up of 11 groups. In 2019 they were joined by a group of people who had prepared to participate with an allegorical car focusing on cancer prevention. This was supposed to be a tribute to the Vázquez Ramírez family, who had experienced the death of two of their members: Lucy and Ale. They carried tarps and blankets with messages like «be in touch with yourself so that it [the cancer] doesn’t touch you.»

Each squad, made up of Locos in costume, was accompanied by a group that provided them with drinks, brought them sweets to distribute, and made sure that no one without a badge was admitted. They were also in charge of making sure that the children—in their eagerness for sweets—did not come too close to the wheels of the truck. The order of appearance of each allegorical car has always been a delicate issue. At first it was left to chance, and lots were drawn, but today it is done in a more democratic and fair way by majority vote.

The image of San Pascual was created by Don Genaro Almanza, and that sculpture still presides over the meetings and public appearances. The meetings were held in the carpentry shop of Don Primitivo Luna, the «Chipotas» who they later called «Atorón.» Since 1961, the New Squad has received many invitations to different festivities in many cities, and they bring joy with their dancing wherever they go. In the city of Guanajuato, they are an important part of the secular celebrations in the neighborhoods of Carrizo and Terremoto. In Silao, they show up on the feast of the Virgin of Guadalupe. In Dolores Hidalgo, they are there during the May festivities. They also attend various neighborhood and community events. 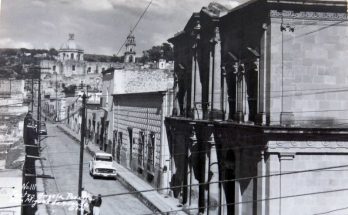 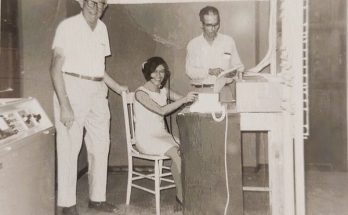 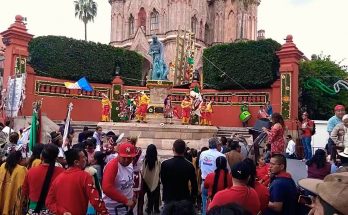