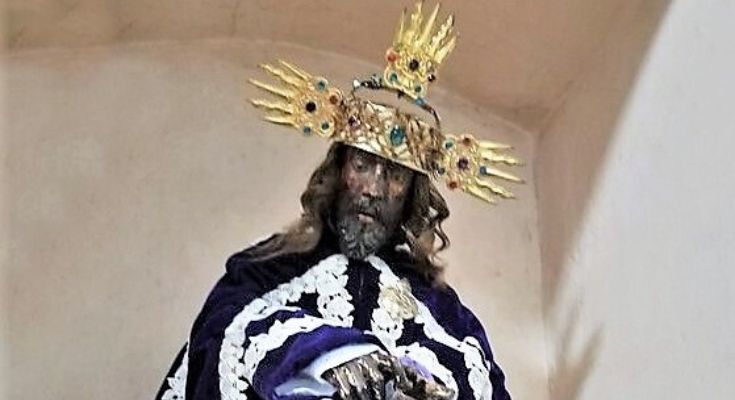 A few weeks ago I wrote about the Senor de la Conquista statue in the Parroquia, dating back to 1574. There is another sculpture that was brought to town just two decades later. It can, therefore, be considered almost contemporaneous, and along with the other, another example of the city’s oldest, independent works of art. The image of Ecce Homo—also known as the Black Jesus, is now inside the Parroquia, moved to its present location some two years ago. Previously, it was in its own niche, behind the altar for many years; away from the public eye. I was given permission to see and photograph it then, and this is what the wooden statue looks like close up.

The chapel of Nuestra Senora de la Soledad—Our Lady of Solitude, was built and founded by the brotherhood of Mulatto vaqueros (cowboys), in 1594. The original entryway can still be accessed on the side of the church of the Oratory.

Devotion to the Lady of Solitude emerged in the 16th century, and is considered a singularly Spanish devotion. It acquired many followers in America, and brotherhoods were founded throughout New Spain. Her worship spread to the brotherhoods made up of blacks, and mulattoes, who took Solitude as their patroness, in remembrance of the passion of Christ. Sometime in the 17th century, the brotherhood added the worship of Ecce Homo, and by the 18th century the two coexisted—the church of Our Lady of Solitude and Santo Ecce Homo. The Latin term Ecce Homo is translated as “behold the man,” and refers to the supposed words of Pontius Pilate when presenting captive Jesus, crowned with thorns, to the crowd. The cult of Ecce Homo arose in San Miguel el Grande because the image was considered a protector against plagues.  He was also named The Lord of the Harvests, and to this day, many claim that carrying the statue in procession brings rain.

The mulatto church was autonomous for more than a century, and carried out processions throughout the year, taking the statue on their trajectories. Whenever there was an outbreak of an illness, such as the plague; or lack of water, or other public needs, the statue was carried and prayed to for reprieve. It was also carried on New Year’s Day, Good Friday, and Easter Sunday, together with the image of Our Lady of Solitude.

Then in 1712, Juan Antonio Pérez de Espinosa, an Oratorian—member of the Order of St. Philip Neri—arrived in San Miguel el Grande. His sermons so impressed the residents that they offered him the mulatto church of Ecce Homo. In spite of objections from the mulatto brotherhood, who insisted on remaining independent, they were ordered to share the space with the Oratorians. Over the next decades, the brotherhood maintained a good relationship with the church, and could take out both figures during their processions. But conflict arose when the Oratorians claimed that they had to ask for permission from the brotherhood to use the Ecce Homo statue. The mulattoes, on the other hand, could do so whenever they wished, without informing the congregation. The disputes continued, and eventually the Oratorians asked the bishop to intervene. Although the mulattoes had originally built the church, had brought in, and maintained the sculpture of Ecce Homo, the bishop gave autonomy and independence to the church of the Oratory. He sided with the priests who, «when there is public need for illness or lack of rain in this town, should be able to take out the image of the Santo Ecce Homo without having to give notice to the brotherhood.” This drastically changed the access to the Ecce Homo figure, and the dispute as to who owned it.

In the end, the mulattoes lost their claim, as well as the Ecce Homo—the Black Jesus, whom they had worshiped through the centuries. In 1742, the bishop authorized moving the statue to the Parroquia, to a niche behind the altar. This is where it has remained, although in the past two years it was moved to the main church, and can currently be viewed behind glass.

It is a typical Catholic depiction of an anguished Jesus, filled with cuts and wounds, a glorification of suffering, consistent with church dogma. However, one can appreciate its artistic value without the attached beliefs. And, it is almost certainly one of the oldest, still extant, pieces of art in San Miguel de Allende. Natalie Taylor: BA in English Lit and Journalism, Loyola University, Chicago, 1995. MFA in Creative Writing, Vermont College, Montpelier, VT, 1999. Published writer, editor, journalist. Spanish teacher in the US, English teacher in Buenos Aires, Argentina. Translator. www.natalietaylor.org Contact: tangonata@gmail.com 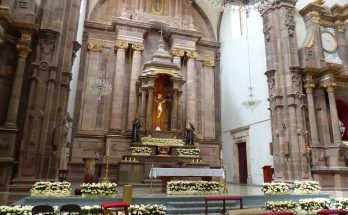 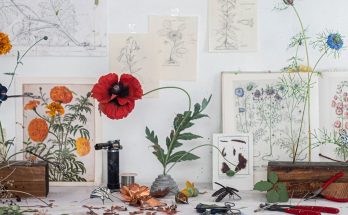 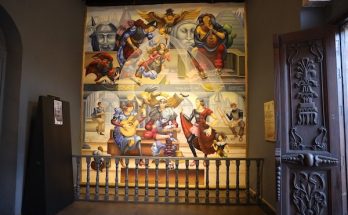