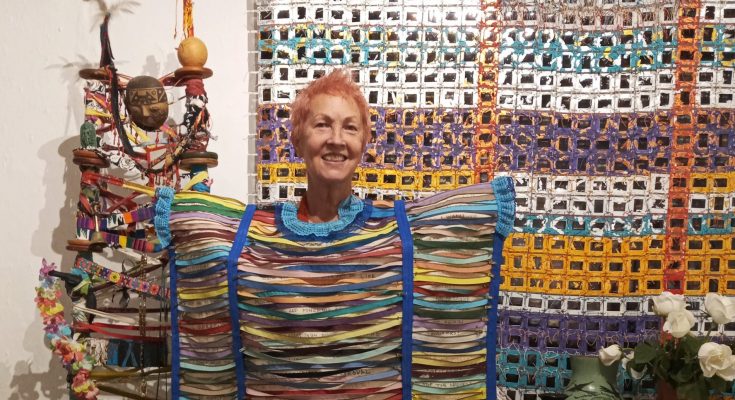 In her studio, surrounded by her version of the huipil, Lena Bartula tells me she was born in Ft Worth, Texas, and brought up as a good Catholic girl. Even as a little girl she always “made art”—copying from magazines or creating paper dolls. She married young, became a mother, and never went to college.

In 1974 she moved to Oklahoma City, which had a thriving art community and began searching for art instruction in any form. In workshops, classes, and with private instructors she studied portraiture, oils, water colors, and any art technique or medium she could find. Through these courses, and immersion in the arts, she began forming her own ideas of what she wanted to do. She began painting, becoming a “copy master,” and showing them in craft shows. To her great satisfaction, her works sold!

In 1981 she realized that her marriage was done, and she “needed a divorce.” Then came the next challenge; making enough money to raise three children on her own. But it wasn’t just making money, it was a matter of finding a job in the arts that would bring sufficient income. Through a connection, she was able to get an interview at the Oklahoma Museum of Art, and was hired as director.

Pursuing her own path, Lena decided to make “wearable art,” and created a viable and profitable business within two years. Following this, she moved to Santa Fe, New Mexico where she had an art gallery and where she says she “flourished.” She also took a trip to Belize, Guatemala, and Mexico in the 1990s and liked Mexico in particular. In 1994 she became head of a mural project called High Road—from Santa Fe to Guadalajara, for which she hired five artists to do the work. A year later she participated in a ten day women’s retreat in Mexico City. The retreat was run by radical, feminist nuns who promoted Liberation Theology. They took the participants to all the matriarchal sites (one of the nuns had done her thesis on this), and spoke to them about their rights as women, and as indigenous people. It was then that Lena truly fell in love with Mexico.

She began exploring potential places to settle, and someone mentioned San Miguel de Allende. In 2003 she arrived here, stopped at several art galleries, and was very quickly was invited to do an exhibit of her works. This was so welcoming, she had no doubt she wanted to live here. But she first moved to Mineral de Pozos because it was so removed. It was, as she says, a place of “dust and tumbleweeds.” Eventually, the remoteness became a deterrent to her growth as an artist and she moved to San Miguel in 2010, where she lives and has her studio to this day.

For almost 20 years now, Lena has been working with textiles. In particular, she became fascinated by the huipil, the traditional garment worn by indigenous women of Mexico, and Central America. They are either blouses or dresses made of rectangular pieces of fabric stitched together. But that is just the beginning. Each woman’s huipil is particular because of the fabric from which it is made, the stitching, and the decorations that are put on it. It is like the recipe for mole—each cook tweaks the recipe just so to make it uniquely her own.

The huipil represents not only the millennial traditions and cultures of the indigenous people, and how indigenous women used the garment to maintain their rich history. The natives of America suffered greatly with Spanish colonialism, and like with so many other subjugated people, the conquerors attempted to eradicate their language by forbidding them to speak their native tongue. That is one of the most effective ways to stifle culture. What Lena discovered was that indigenous women hid words, texts, and stories within the weaving, creating in essence books that are worn. A culture preserved, yet hidden from the conqueror’s eye

In Lena’s hands the huipil has morphed into her own vision, her own art form through which she can express personal and social issues—her concerns for human, and particularly women’s rights. She crafts them from anything and everything she finds: discarded papers, coins, pieces of cloth, feathers, they are found-art woven into cloth. Honoring those women who embedded information into their huipiles to preserve their traditions, Lena uses the garment as a vehicle to express her own convictions. 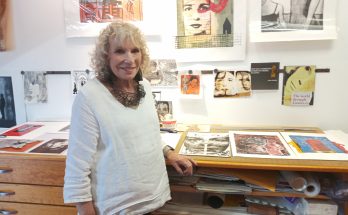 Meet The Artists of San Miguel: Multimedia artist with a focus on women 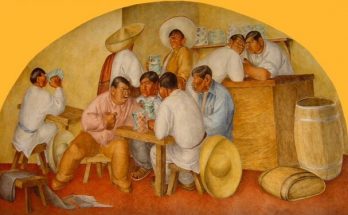 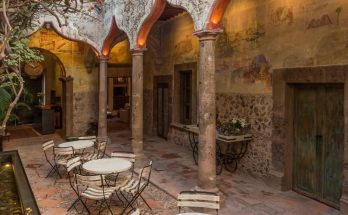