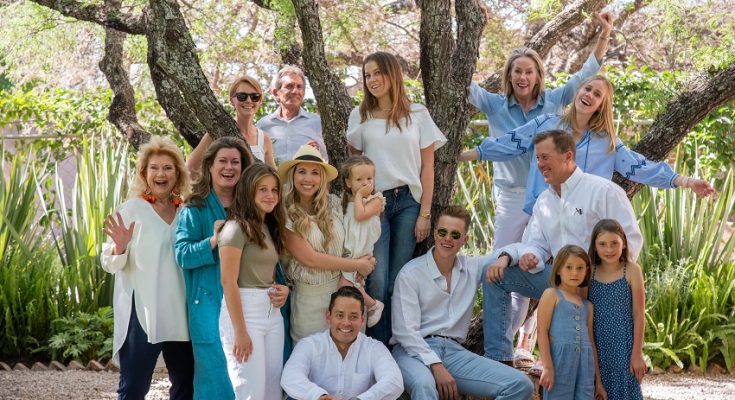 On Feb 7, 1937, a Chicago-born artist named Stirling Dickinson arrived in San Miguel de Allende by train, then took a mule-drawn cart into town. “I looked up and saw the Parroquia sticking up out of the fog, and I said, ‘My gosh, what a place!’

At the time, the town had a population of about 9,000 and had long passed its glory days during the silver rush of the 17th and 18th centuries. But by 1948, Dickinson’s influence had changed San Miguel’s destiny. In that year’s January issue of Life magazine, an article described the town as a “G.I. Paradise” where «veterans go to study art, live cheaply and have a good time.»

Fast forward to an afternoon comida I attended (as a writer for San Miguel Life) with my two girls in the spring of 2022. The gathering was hosted at a restored family property owned by third-generation Sanmiguelense José Antonio and his wife Katharine, originally from Birmingham, Alabama.

Kids skip around the garden, shaded by mesquite trees, while tacos sizzle on a giant comal. The guests chat, mostly in English with a sprinkling of Spanish. We are all connected to San Miguel with strong ties of family, work, and land.

Jim and Ann Dolan have been here for 26 years, have three children born in Mexico, and own a successful real estate business (with Katharine’s mother, Nancy Howze) as well as a horse ranch just outside of town.

My family’s connection to Mexico began with my grandparents, who moved from Minnesota to Mexico City in 1960. My mother brought my sisters and me (all born in Colorado) to San Miguel for the first time in 2000, and I now have two Mexican-born daughters.

The Dickinson-era image of San Miguel as a bohemian escape still resonates, even though the town has since arrived on the international luxury travel scene with gorgeous hotels, celebrity visitors, and a climbing cost of living. But there is a deeper past here, another story: a legacy of Mexicans and foreigners who have bestowed a bridge between cultures and generations.

Sitting on hand-carved furniture on the patio, the sound of decorative papel picado fluttering in the breeze, José Antonio explains how this property once belonged to a 256-hectare ranch. “We kept a small piece of land here and started to restore this ruin into a house. The stones are quartz from the Obraje quarry and were used in SMA over 200 years ago.” The home’s décor is both bold and inviting, a graceful ode to Mexico. “Katharine’s décor is an interpretation of Mexico through the eyes of someone who loves our culture…and is now a part of it.”

Amber Nieto and her husband, Clai, both grew up in San Miguel in households with Mexican and American parents, and they are now raising a family here.

Amber was born in the U.S. and was brought back to San Miguel when she was just 12 days old. “My mom arrived in San Miguel from California in 1977. She had never visited the interior of Mexico—and as destiny would have it, she met my father on her first day here. Many years later, my maternal grandmother also moved here and became an important community member. Both sides of my family have important histories in the area.”

“I think our kids feel more Mexican than American,” says Ann of her teenagers. “They speak with each other in Spanish—in fact, we tried an experiment to get them to converse only in English at home during the pandemic lockdown, but they said it felt too unnatural and they couldn’t do it,” she says with a laugh.

“One of the most amazing things about this community is its inclusiveness,” says Ann. “When we first started coming here, we fell in love with the culture, the weather, the people, and the opportunities.”

“We immersed ourselves more in the foreign community at first, but when we had kids, they pulled us more into the Mexican community,” adds Jim. “The Mexican culture of the family is something we have integrated into our life. We had comida together as a family every day with the kids while they were growing up.” “We celebrate both Mexican and American holidays,” says Ann, describing how her family cherishes their traditions. “We host a Thanksgiving feast every year, and the kids are used to wearing red, white, and blue on July 4th. Then for the Mexican Independence Day, we are always celebrating in green, white, and red.»

Jim describes his and his son Jake’s involvement in Mexican Independence Day (16 de septiembre) celebrations every year as part of an equestrian group from Querétaro—“there are 300 of us, and I’m the only American”—in which they re-enact the ride from Querétaro to Dolores with a message from Josefa Domínguez for Padre Miguel Hidalgo.

“In Mexico, it’s all about relationships: to the point that it might trump other factors,” says Clai about how working in Mexico contrasts with the U.S. “The business comidas that go on for many hours, negotiations that end in going to someone’s weekend home with the family.”

“I remember our birthday parties growing up because they were such big events with lots of friends of all ages,” says Jake, Jim and Ann’s son (16). “Mexican culture is so lively, it is something I treasure about my experience growing up here,” says Olivia (17), who plans to pursue law and business in college. Her sister, Sofía, believes that growing up bi-cultural has given her an advantage, being able to adapt to a wide array of situations with people from any background.

“I’ve learned that not everything has to happen immediately and that it doesn’t have to happen on my time,” says Nancy Howze, mother to Katharine, contemplating how Mexico has changed her. “I think I’m a nicer and more patient person for living here.”

Everyone emphasizes how the Mexican devotion to family has influenced their lives here. “One of the things José Antonio has taught me is that family is really the heart of everything, it’s important to treasure it. As a person growing up in the US, it’s not the same: everyone scatters,” observes Katharine.

Stirling Dickinson did not leave behind a family, but he did create a legacy. He lived humbly, ventured on expeditions around Mexico to collect orchids, and quietly laid the foundation for generations of foreigners to not only visit this once sleepy town but to give back to it.

“I welcome expats here, Americans put San Miguel on the map,” says Juan Nieto, Amber’s father, when asked how he regards the foreign influx, as a Mexican. “Look at how much they have done, all the charities, the bilingual library, the art scene, and much more.”

“See the three paths in this garden?” José Antonio points out winding flagstone paths. “They represent my two brothers and me. They all eventually lead back to the home. My abuelo was a visionary, he wanted to restore this property for his future descendants, people he would never know. That is what a legacy is.”

Visit www.sanmiguellife.com for more from Nancy, Ann and Amber. 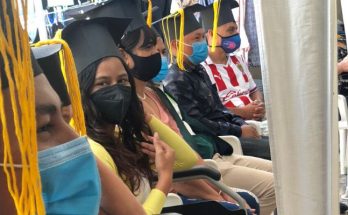 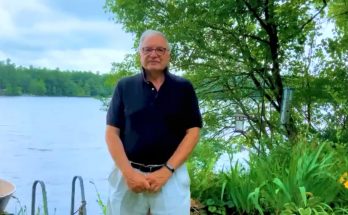 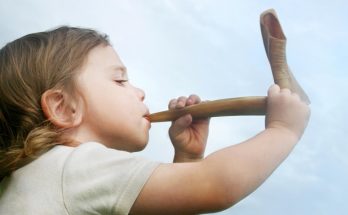