When you walk into Bellas Artes and walk straight ahead beneath the arches, you will come to a remarkable mural. It is, first of all, a depiction of Mexican working women, but more remarkable is the fact that this work was done by a woman. Not a Mexican woman, but an artist from Chicago who appeared in the midst of Mexican muralists, led by unabashedly macho males like Diego Rivera and David Alfaro Siquieiros, two of the big stars of the mid-1900s. The woman was Eleanor Coen and the amazing fresco she painted on the wall of Bellas Artes is Las Lavanderas—The Washerwomen.

In recent years there has been criticism of those outside a culture attempting to depict it. No matter the care taken, there is always the potential of misinterpreting or, worse yet, patronizing a particular society. The issue is not simple, and there are many ways to interpret the motivations and the end results of an artist’s work. One might ask if anyone at all is capable of interpreting another.

In the case of Eleanor Coen’s mural, it seems that she has depicted the women in the mural with respect and even love. And, the fact that she chose these humble women as subject of the mural, would indicate that she has paid homage to them. After all, she could very well had chosen to paint portraits of some wealthy residents of the city.

Eleanor Coen was born in Normal, Illinois and studied at the Art Institute of Chicago. One of her teachers was Max Kahn, an established artist, whom she later married. She graduated in 1941, and was the first woman to receive the school’s James Nelson Raymond Traveling Fellowship. Instead of Europe, she chose to go to Mexico with Max, and they ended up in San Miguel de Allende. It may have been because of a connection to Stirling Dickinson, also a graduate of the Art Institute. Max taught at the School of Bellas Artes, and Coen began working on her mural on one of the walls. She had become interested in the ideals of Mexican muralism—preserving the pre-colonial history and traditions of the country, the depiction of peasants, workers, and racially mixed people; these were the protagonists and heroes of Mexican muralists. She was influenced by the works of two major muralists, Jose Clemente Orozco, and Pablo O’Higgins, the latter becoming a personal friend.

But Coen took those ideals one step further, by focusing on women and children from the campo. The large hands and feet, and the thick limbs are similar to the typical muralist depiction of common people that characterized the paintings of the other Mexican muralists of the time. In Coen’s mural, the figures are positioned around a central figure, kneeling and dipping her hand in the water. Most of the other figures have their backs to us, other than one woman in the back, and the two children in the foreground. However, all eyes are averted from us, with the exception of one child—it is not clear whether it is a girl or a boy, who stares at us directly with the power of innocence. This child alone, fully naked, is neither ashamed nor intimidated by the onlooker. This is my life, the child seems to say, what of it?

Coen developed her own unique version of depicting children, often using her own son and daughter as models. She continued refining her vision through the 40s, and became known specifically for her paintings, and prints of children. In her works, they are small, round-faced pixies, who almost seem to have been plucked from a fairy tale. She does that with the three children in the mural—yes, they are real children but they have an otherworldly quality to them.

Eleanor Coen and Max Kahn, known to family and friends as Max and Coney, returned to Chicago and became a powerhouse art couple. They continued making art, teaching, winning prizes, and renown. Coen showed her lithographs at the Smithsonian Institution in 1951 in a solo exhibit. She died in 2010, at the age of 93.

We are fortunate to have her legacy in our city. I invite you to come visit the women washing and wringing out their clothes on the walls of Bellas Artes; they are as alive and colorful today as they were when first painted. 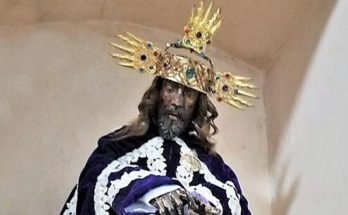 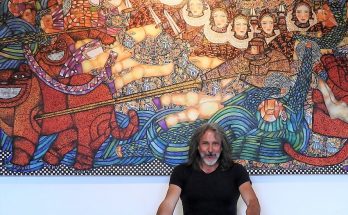 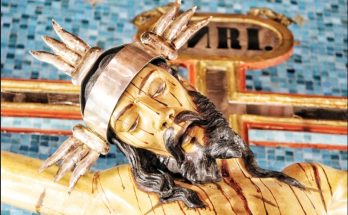